WORLD TIME was printed at 12 o-clock, just under the SEIKO logo. At 6-o'clock was printed AUTOMATIC, then DIASHOCK and then 17 JEWELS. There was no lume on the dial or the hands. The GMT hand was of the tapered or thin variety, with black GMT hands on silver dials, and gold/copper colored GMT hands on black dials. The numbers around the 24-hour ring are cut-outs in the ring colors, rather than a printed digits, and the number 18 is split between the day and night colors on the 24-hour ring.

In August 1966 SEIKO produced a special edition 6217-7010 in celebration of the Asian Games. This watch received an updated case and crown, while retaining the dial and hands format from the 6217-7000.

While the Asian Games special edition watch takes credit for being the first 6217-7010 model designation (in August 1966), it was its later siblings in 1967 that received the updated dial. In this case, both dials (silver and black) remained nearly identical to their prior versions, with added circular dots of lume at the inside edge of each hour marker. The dial code designation was also updated to read: JAPAN 6217 | 7010TAD.

Similarly, the hour and minutes hands retain their previous shape, this time with strips of applied lume. The tapered GMT hands retired completely, with all examples now using the thin variety for this series.

NOTE: There appear two be two variations of the black dial's 24-hour ring. One has a more copper/gold or yellow tone on the bottom half, the other a more reddish bronze tone. It is unclear if these are examples of the same dial, with some having faded over time, or in fact different color options.

The dials were again updated for the 1968 production of the 6117-6010 and 6117-6019. This time the lumed dots at each hour marker are replaced with lumed indices at 12, 6 and 9 o'clock. A rectangular lume application is also placed at 3-o'clock, next to the date window. AUTOMATIC is moved to the 12-o'clock position, under the SEIKO logo. WORLD TIME is moved to the 6-o'clock position, along with the Suwa logo. No more mention of the jewel count or diashock feature.

The GMT hand is replaced with a red version on both dial colors, with a new lumed arrow tip. The hour and minute hands are carried forward from the previous model.

At the end of 1969 SEIKO started production of the new 6117-6400 and 6117-6409 models. With this version they replaced the black sunburst dial with a black linen texture dial. The silver linen dial was likewise replaced with an off-white dial. Lume was again updated, now at each hour marker as an integrated part of the indices. The hands and lume were also updated.

In prior releases the lighter colored dials accounted for about 75% of the total production, with the black dials making up the other 25%. In this new series, black and white dials were manufactured in similar numbers for a closer to 50/50 split.

Also for the first time, the 24-hour ring is displayed in a single color all the way around, with a printed font color applied, instead of the old cut-out numbers look. The font is changed - and much wider, with the zero marker being perhaps the most obvious example.

At the end of 1970 SEIKO made another change to the dials in this series. This time it was quite small. The position of WORLD TIME was moved back to the 12-o'clock spot on the dial, trading places with AUTOMATIC.

A gold version of this dial was also produced.

At the end of 1974 SEIKO introduced a new variant without lume. These are quite rare in the data set, currently only appearing on a subset of the watches produced between December 1974 and Februrary 1975.

First off, it is commonly believed that AD stands for Applied Dial - as in the hour markers and SEIKO logo are separate pieces that have been attached (applied) to the dial, instead of printed or painted on. No one seems to disagree on that. Further, some like to repeat that AD and TAD both simply stand for Applied Dial, but on this point there is less consensus.

If we limit our consideration exclusively to the World Time dials from 1964 through 1976, for which we have a reasonable data set to analyze, it certainly seems plausible that the T was used to indicate the use of lume, or in some (early) cases, the potential use of lume. It also seems likely that early use was limited to dials intended for international markets (outside of Japan), eventually appearing on all watches in this series. This aligns with the use of T in Swiss watches to indicate the use of Tritium, R for Radium, etc. The timing (1964) also lines up nicely.

In the early 1960's Swiss watch manufacturers started moving away from the use of radium for lume on dial and hands, in favor of tritium, a safer alternative. Around the same time, the Swiss government introduced new legislation about the use and sale of radioactive material, including luminescent paint used on watch dials and hands. Among the new rules was a requirement to include a visual indication when radioactive materials were used - thus SWISS T or T SWISS T in many Swiss watches of the time. Effective from July 1, 1964, Swiss manufacturers were only allowed to sell watches complying with these new regulations.

While we have no known documentation on how SEIKO reacted to this law - we do have an interesting note from OMEGA's corporate archives, relaying its importance and impact. From an internal memo dated June 1964 - OMEGA states that suppliers have been notified that from April 1, 1964 all luminous dials arriving at the factory must be marked with a T, and that from October 1, 1964 all unmarked dials have to be removed from the watch cases to have the counter-mark added or to be replaced. Click here for more on that.

Interestingly, the first examples of the use of T on a dial code from this series appears in our dataset in May of 1964, a 6217-7000 with dial code JAPAN 6217-7000TAD. This dial code ending in TAD remained uncommon until 1967, when luminous hands and dials were used regularly. From 1968 onward ALL dial codes ended in TAD, T AD or just T (and all dials and hands were lumed).

There is a commonly sited response from a qualified source, Mr. Ikou Tokunaga (who joined Seiko in 1970 and was involved in the development of several important SEIKO watches), stating that SEIKO did not use Tritium, but instead Promethium to lume their dials. Click here to read the thread. It is not clear if he was referring to more modern dials or if in fact he is speaking to all SEIKO production back to the introduction of Tritium in 1956. To give a bit of perspective, Rolex and Omega used Tritium into the 1990's, and it is rumored that SEIKO used Promethium through about the same period (read more here). They all used Radium at some point in the distant past, but it is unlikely that Radium was used in the 1970's (where we see Pogue's with R dial codes) and similarly unlikely that they used Tritium in the 60's and 70's based on this information.

As a matter of pure speculation, based on the notes above, it seems plausible that the T was intended to indicate the use (or intended future use) of Tritium or another similar radioactive lume. It also seems plausible that the earliest examples in 1964 were created for international markets, where these new Swiss regulations were time sensitive and commercially important. And perhaps SEIKO was not sure when lumed hands would be introduced - and to not cause a production issue down the line, started having the international dials include the T notation before they actually added any lume.

If the T was in fact intended to follow new Swiss regulation to indicate the use of Tritium (or another radioactive product) as lume - then it would seem we have an original "Error Dial" from SEIKO - where T is used but no lume applied. Another collectible variant? Or an incorrect reading of the tea leafs? 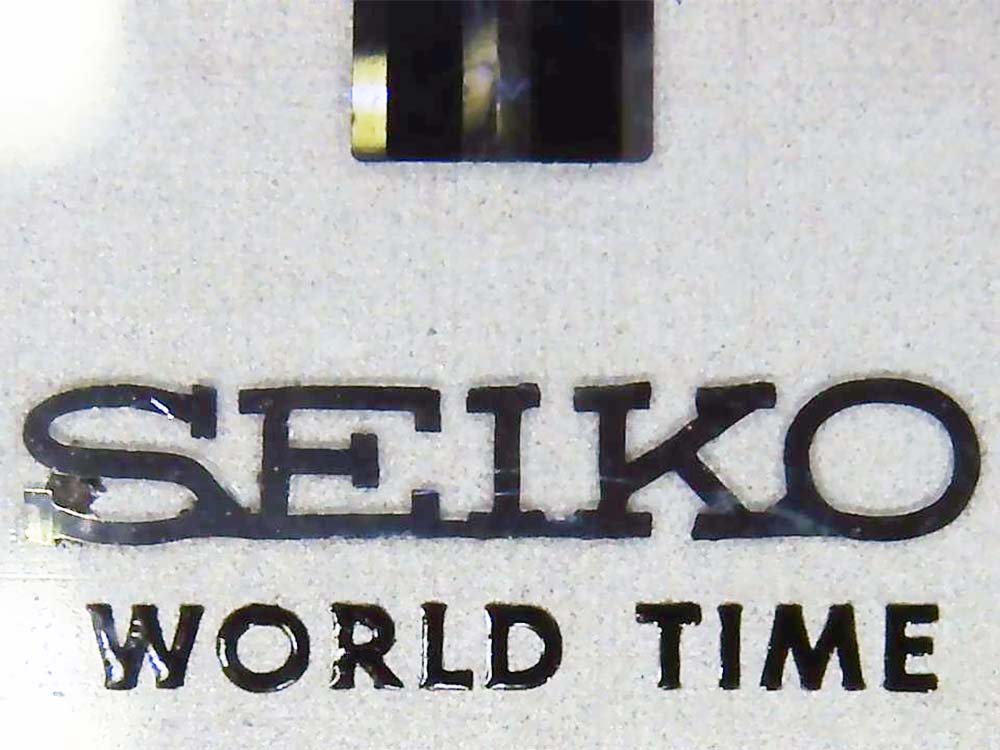 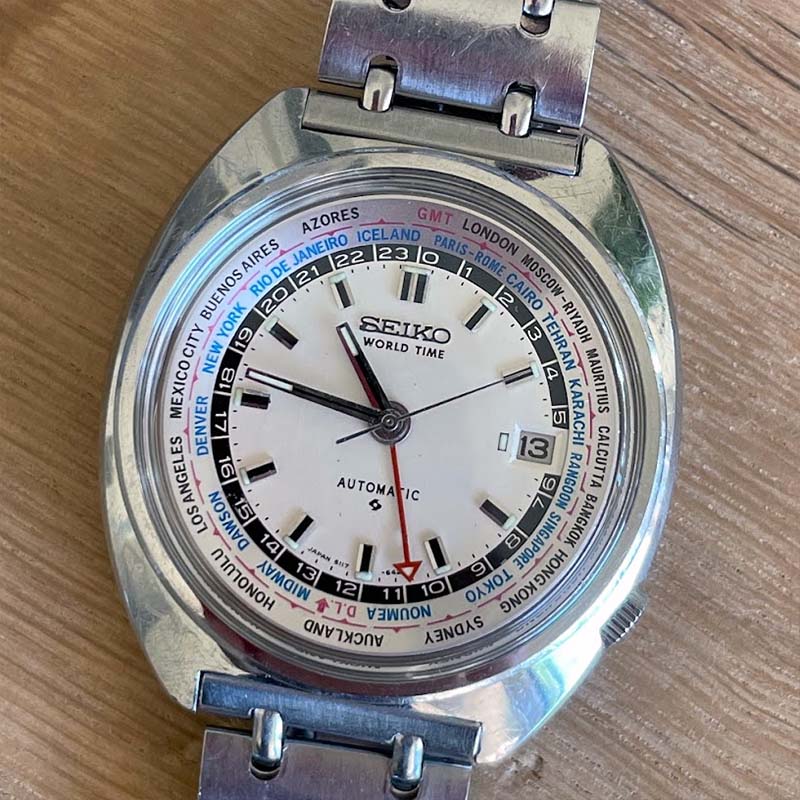 All about the 4th series world time watch from SEIKO, produced from 1969 through 1976 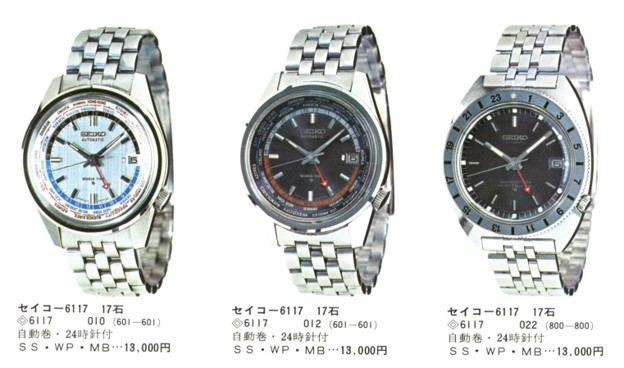 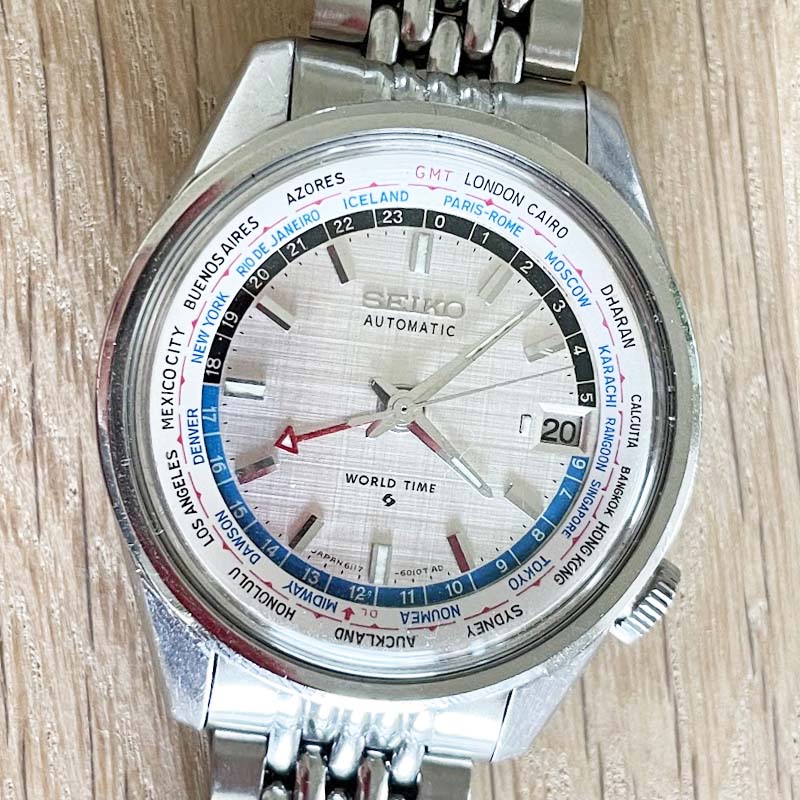 All about the 3rd series world time watch from SEIKO, produced from 1968 through 1969 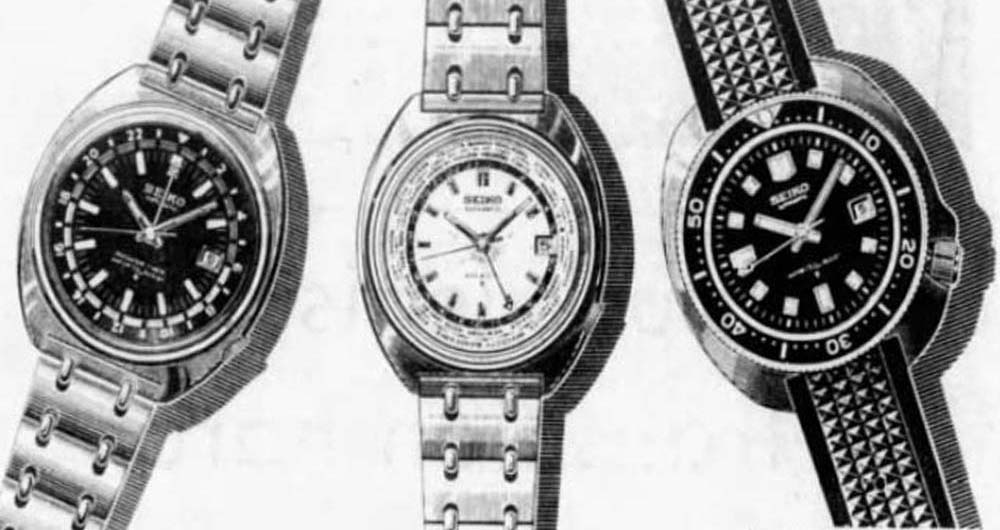 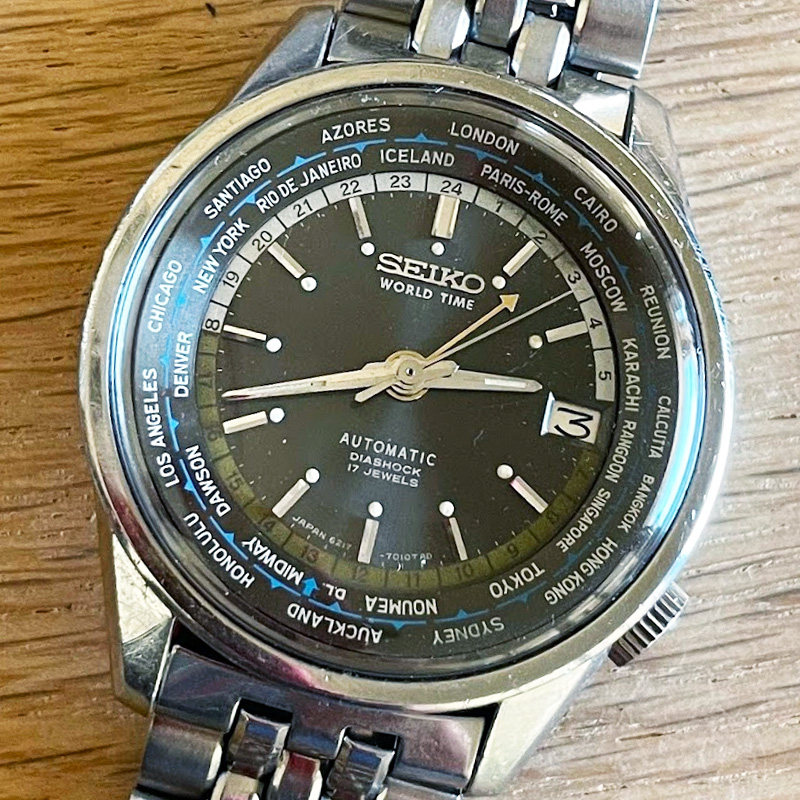